Our Malaysia. Our information. Our right.

We, at C4, are happy to announce that this idea that we put forth during our meeting with Prof Ramasamy last month will be materialising sooner than later! 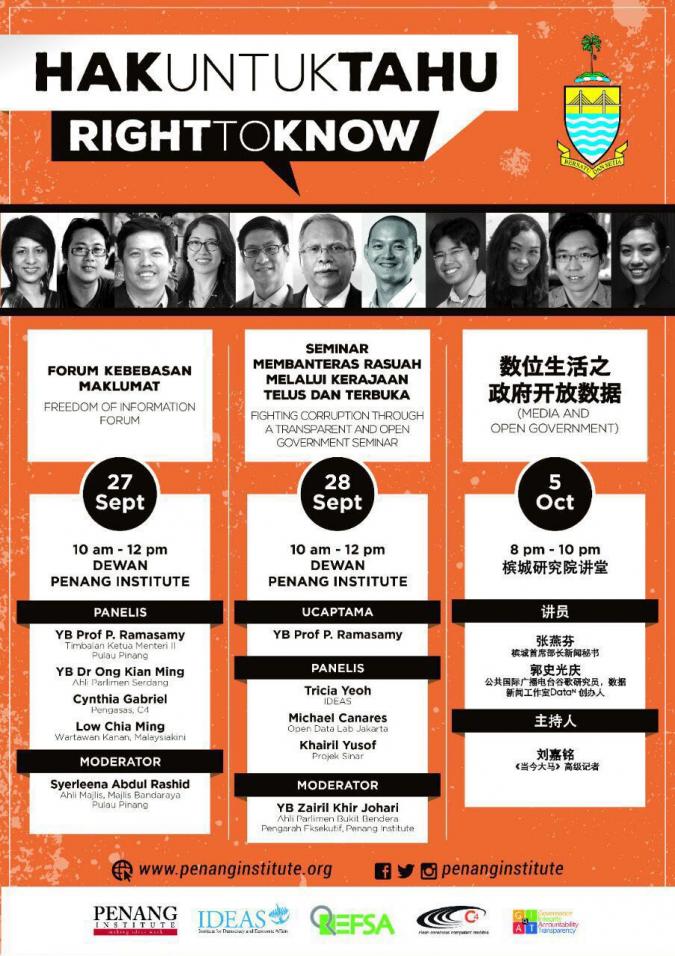 Penang will be gathering views from all parties, including experts and the public, on how to improve the implementation of the state’s Freedom of Information Enactment which was enforced last year.
Penang Deputy Chief Minister II P Ramasamy, who is in charge of the enactment, said the state government would be organising a two-day programme in conjunction with International Right to Know Day on Sept 28 to create awareness on the enactment.

He said organisers of the event, which starts on Sept 27, include think-tank and civil society organisations such as Penang Institute (PI), Institute for Democracy and Economic Affairs (IDEAS), Research for Social Advancement (REFSA), the Center to Combat Corruption and Cronyism (C4) and Project Sinar.

Ramasamy said he was present at the launch of C4’s northern region branch and heard many criticisms about the enactment related to the high application fees and the requirement to sign a statutory declaration to restrict the applicant from making profit out of the documents.

“We are open to criticisms, and we are looking into the complaints made about the FOI fees and enactment; nothing is cast in stones, so we will be looking at ways to improve the implementation of the act,” he told a press conference in George Town today.

He said PI had been involved in FOI work like producing a housing research online, which is used by both state government and opposition to scrutinise Penang’s housing policy.

“Up to 2012, we have collected a series of articles on Penang in numbers, and some of Malaysia’s data,” said the Bukit Mertajam MP.

“One of the objectives of the Right to Know campaign is to look at ways to improve the FOI Enactment in Penang, and we are happy that Ramasamyis willing to look into the matter,” he added.

“The two-day event will include 58 information officers, who will attend training sessions on how to deal with the FOI Enactment,” he said.

“The public does not know that a lot of information they want are already accessible. The FOI should be used as last resort to obtain information that is not in the public domain,” he said.

Have you liked us?

Have you liked us?